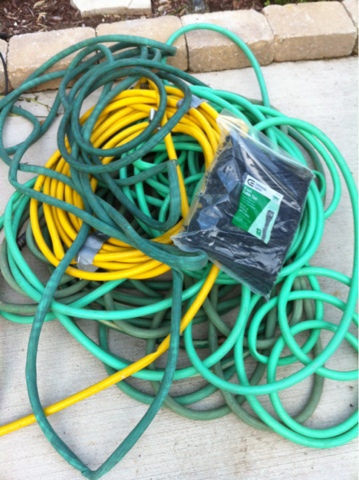 I started on the ground zipping my hoses together. I started with 31 inch long hose and started to bend it around and around. 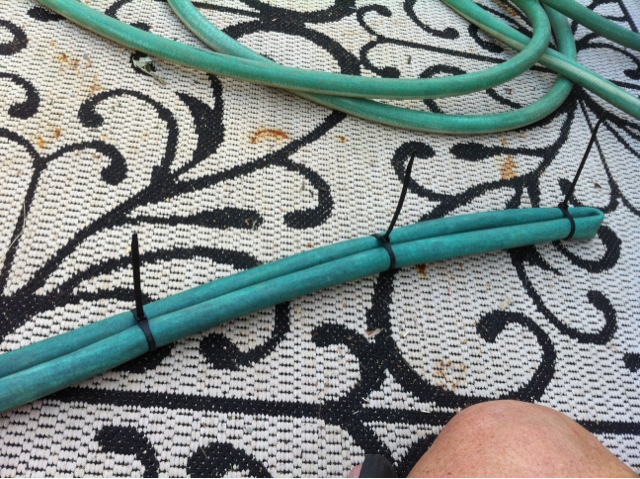 I  quickly decided to do it on a table. I can't sit on the ground like I used to when I was younger 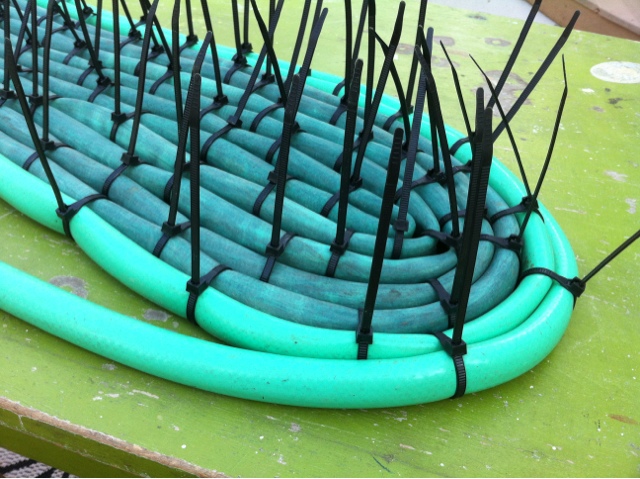 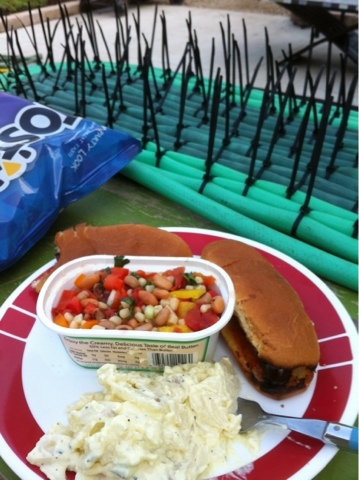 Break time..need food! After all, it is the 4th of July 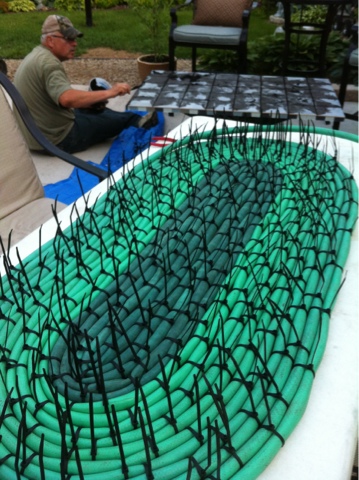 Had to move to a bigger table. You may want to start with a larger table to begin with. You can see hubby working on his table he tiled in the background.  I will share his work in a later post. 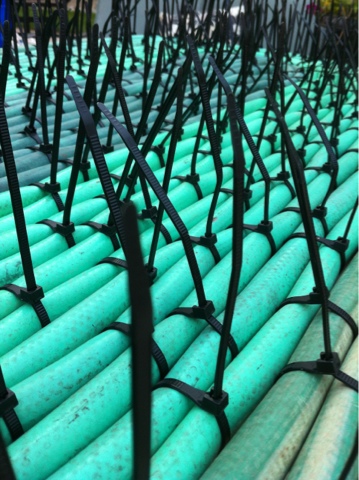 Look at all those ends 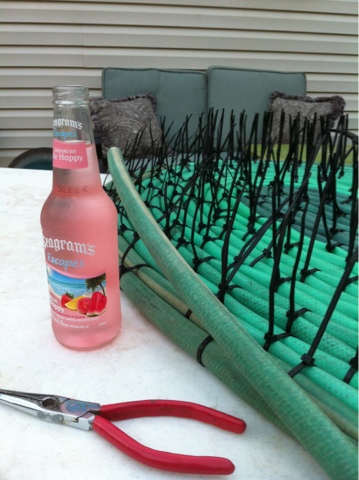 Break time (this is taking longer then I thought it would, lucky it is so nice outside and it's a relaxing task) For those asking if it's hard on your hands...not at all. But using a needle nose pliers even makes it easier. 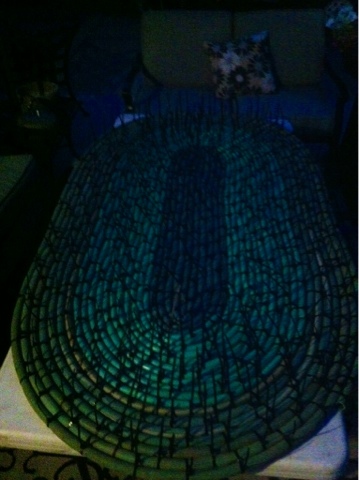 Finished up, but to dark to clip the ends or even get a good picture. Just in time for the fireworks. 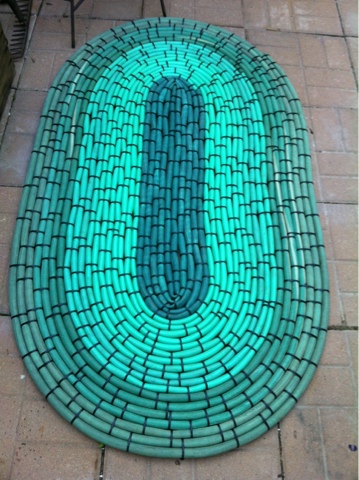 Next day..Mike clipped all the ends. 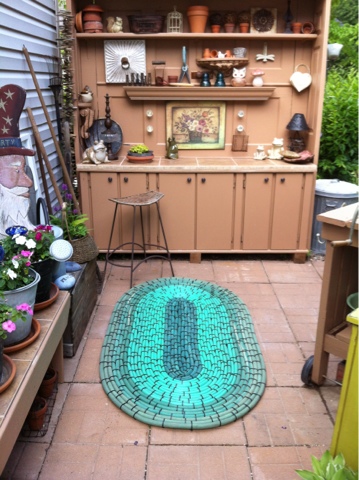 Love the way it turned out and it feels like walking on crocs. I may have used more zip ties then needed.  But I figured if some broke it would not make a difference. I used four different hoses. The end size is 61" by 35" I think I may even make a round one when I get some more old hoses. 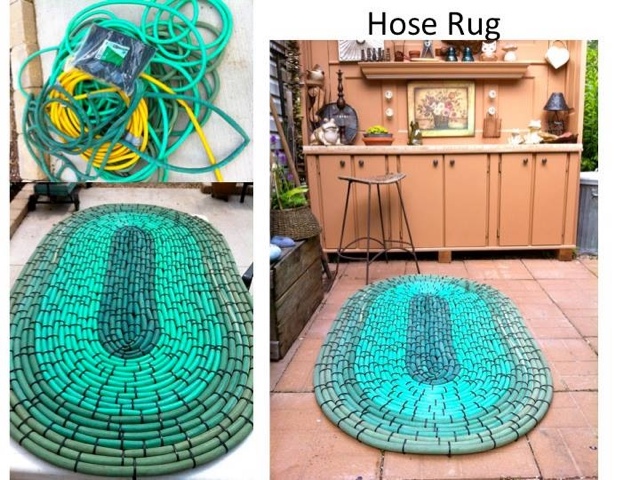 What a great way to use old garden hoses!

Love it! Especially the narrative and photos!

How sweet! A friend sent me the link to your pic on Pinterest, but it is more your blog entry about creating it that makes me wish I knew your personally! Thank you so much for posting such a fun event. :-) Even though it is hot here, I just happen to have some old hoses around. I just have to go get the Seagram's. :-)

You have to have the Seagrams Raggedy Princess. It's an important part of the process...LOL

Im gonna hit my friends up for some old hoses and make this unique rug. Thank you for sharing.

Amazing! I'd like to know how the zip ties have held up once they were clipped.

So creative. Love it!

I can't tell you how many garden hoses have gone by the wayside when I could have been making these practical outdoor rugs with them instead! Great idea ...

May I make a suggestion: you have a great website, but the posts are hard to read. I had to zoom in 3x to be able to see the very light font! It's very artistic but the t's aren't even crossed, making it difficult to read especially when the script is too light to make out the words in Normal View.

It's your message that is the focus, not the font. You have a wonderful blog - so please, share it with more readers, and swap creativity for readability!

I am so happy you are enjoying my blog. I really appreciate your suggestions and have changed my text and color. I am using a Mac and I guess it looks different. If you could please let me know if this better, that would be awesome.
Thanks again!!!

You are so clever! I asked my hubby if we have any old hoses and he replied, "sure we do, everything we have is old" hahahaha! always a joker! He thought this was a great idea too. As soon as we get some nice weather, I want to do this. I'll make sure we have lunch prepared and I especially liked your choice of beverage. Too bad my granddaughter isn't closer, I am sure she would love doing this with me. Thanks for the ideas.

What a fantastic idea! I have 2 black hoses in the garage just waiting! TY!

Thanks for a great idea and so enjoyably presented. You have a knack, both creatively and narratively.

I have some hoses and I'm going to give this a try. Thx for posting.

May I ask how many feet of hose was used for your end product? Great idea perfect for a garden shed!

I am sorry I did not measure how much I used of each hose. I know I didn't use the whole hose in the two inner sections. Good luck with yours. I plan on making another one this year to place by my gate.

I Love this creative idea!! Thank you so much for sharing!! I will be making one to put by the hot tub that our son got for us. The patio is pretty slppery when wet and this is an ideal solution!!

I was thinking you could run cotton ropes (clothesline) through the hoses to keep them from collasping when you stand on the rug.

Hi, this is really nice but I have a question. How do you attach each hose ends together? I don't see any seams where the 2 different colors are together.
Thank you.

Love it. I will have to look for old hoses! It would be great on my front porch.

Cut the two hoses straight that you are joining together and I just placed extra zip ties right by the cuts.

What do you do with each end of the hose' how do you line them up. Also I assume you need to use the same size hoses?

Yes u have to use the same size hoses. As for the ends I just cut them straight and butt them up to each other and put a zip tie on each side to hold them together.

This will be fantastic in my greenhouse! I have a very old rug in there & it gets wet & then traps the moisture. What a wonderful idea!

It's really pretty. How much does it weigh?

Now I'm kicking myself for tossing those old hoses! I shoulda known that I'd regret that! Oh well, there'll be more old hoses in my future, and those I will hang onto, until I have enough to make a rug out of. I applaud your ingenuity! Well done!

I am trusting the same best exertion from you later on too. Truth be told your experimental writing abilities has roused me.
komposit hegn

What size of zip ties to use?

This would be a great idea for an outdoor shower floor....or washrack for horses. I can't wait to find some broken hoses!

I was thinking about that problem too...

I made one also. It lasted maybe two summers, direct Florida sun and weather. The zip ties are not UV friendly unless they are under a covered roof. I loved it as long as I had it but, like I said, it didn't last. Hope you have better luck.

Amazing nice work. This is very useful article. Thank you. For more

I'm going to try making this hose zip tye rug and get back to you with how it went for me... thanks for the great idea.

Ann
I live in Menasha, WI, where you can find me in my own little paradise, that we have created and nourished over the years. Along that path, we started to create garden art from re-purposed items to complement the plants. That has bloomed into a thriving little craft business that my husband and I share.

Promote Your Page Too